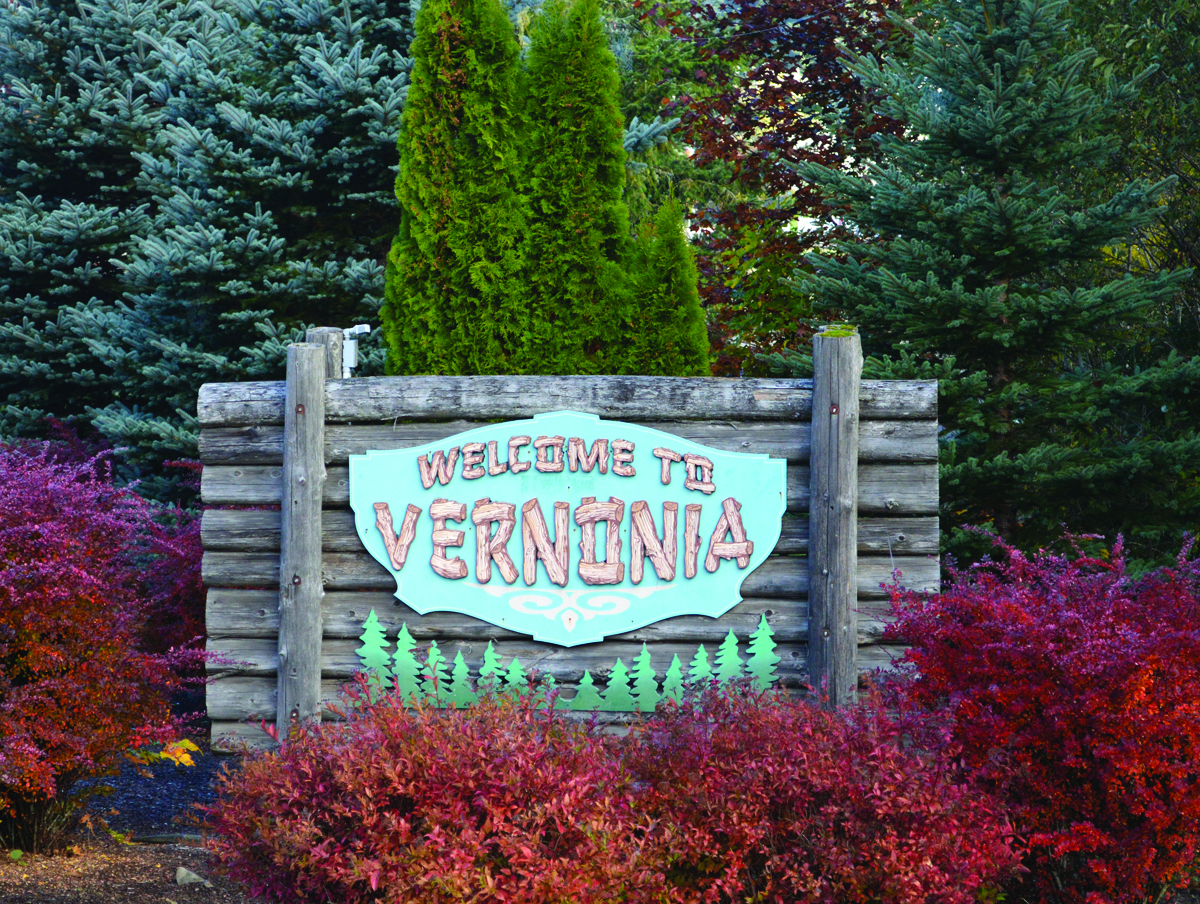 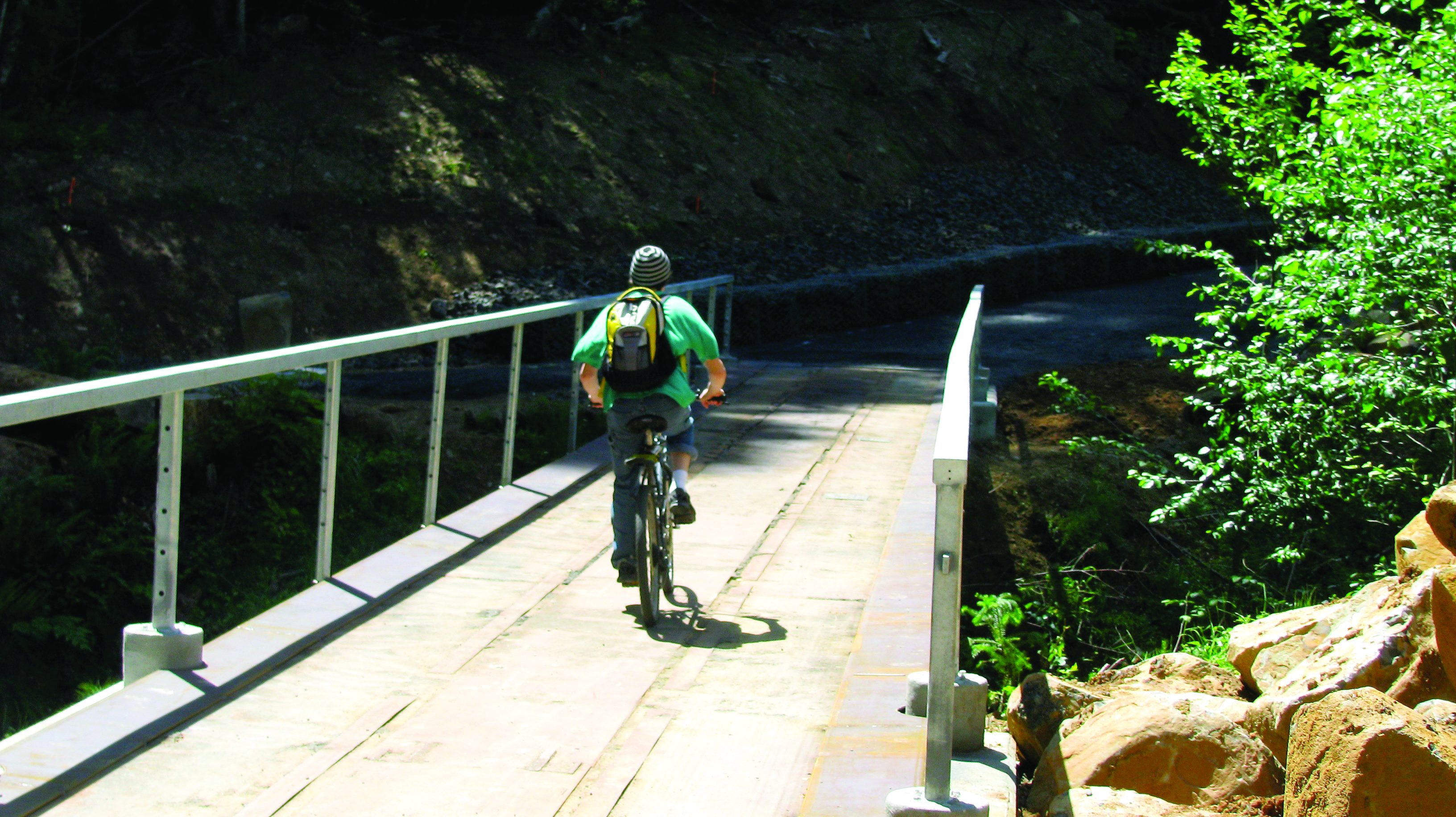 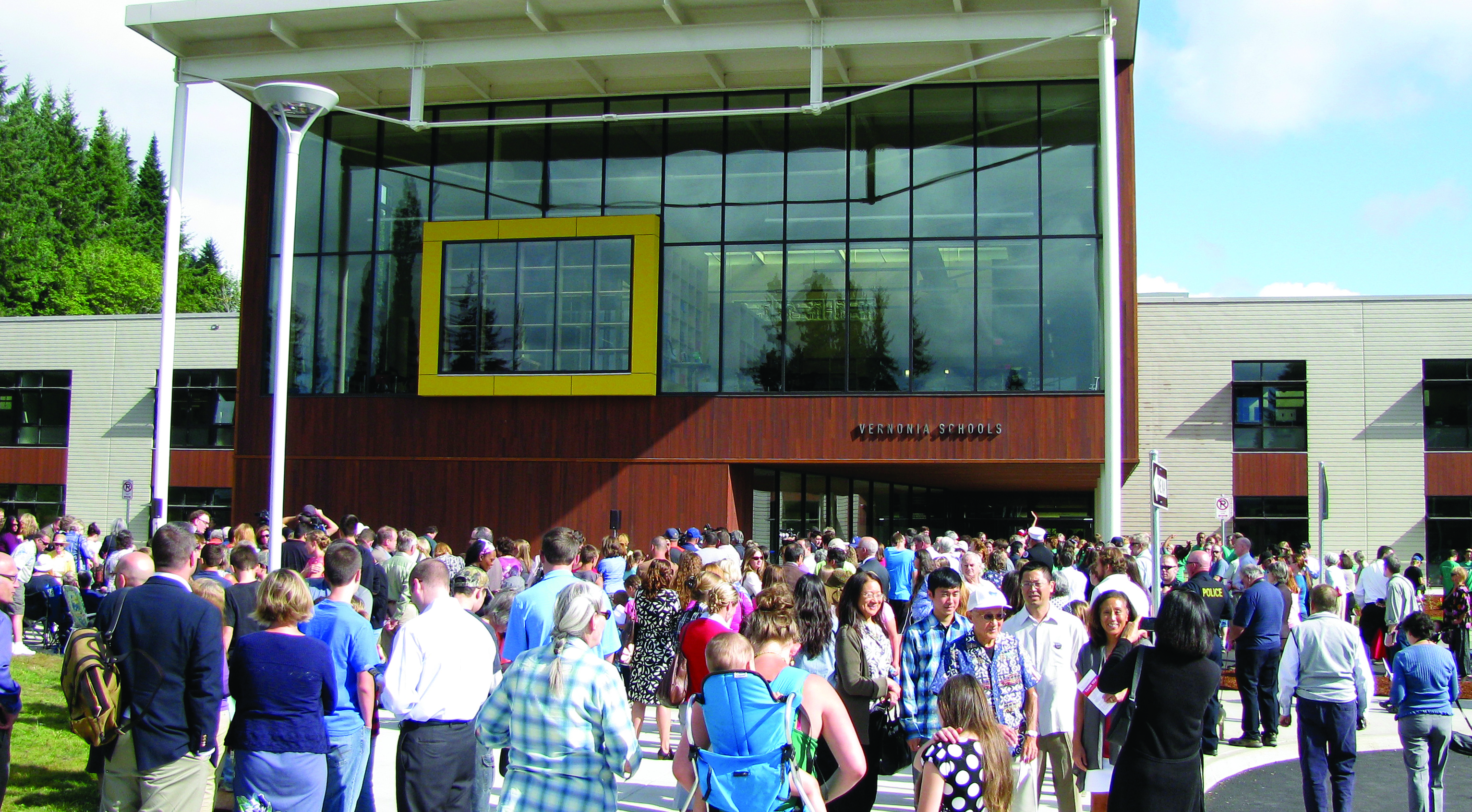 The Vernonia-Banks Trail has been a State Park and local gem for over a decade, and the number of running and cycling events using it has steadily grown. With the Crown-Zellerbach Trail, joining Scappoose to Vernonia, nearing completion, Vernonia has become part of a natural loop from Portland, joining the Columbia River to the Willamette Valley.

The new trails exclude cars, making them a preferred choice for runners and cyclists from across the Pacific Northwest wishing to explore inner Columbia County. The 2017 season is kick-started on June 17th with an active day in both road and off-road cycling in the Columbia Century Challenge.  Our county’s own locally organized, non-competitive, fully supported century (100+ miles) bicycle ride features routes that explore both forest and county roads.

These dedicated cyclists are also able to visit many towns within the county, see some of the attractions of each city, and meet local volunteers at the various aid stations. The inaugural Columbia Century Challenge, which was hosted in St. Helens in 2016, was voted the #2 Best Bike Ride in Oregon on ORBike.com.

In 2017 the Columbia Century Challenge will start and end right in Vernonia’s Spencer City Park, offering rides of 118 miles, 100 kilometers, and a 40 mile ride that features a twelve mile section of the historic Columbia River Mainline.   Vernonia has hosted other organized rides in the past; including Cycle Oregon (twice!), the Timber Logjam, the Beaverton, Banks & Beyond Bicycle Tour, and Bicycle Rides NW.

Bikes aren’t the only way to enjoy the local trails, and many road runners favor the flat scenic routes available around Vernonia. Vernonia has three different charity runs each year. The Bear Creek Run in late July is a fundraiser for the Vernonia Cares food bank. The 5k/10k offers a zero elevation course on the loop around Vernonia Lake and a portion of the linear trail. There are brackets for children and adults, and a special short course for little kids.

The newly minted Graveyard Dash is a 3k/6k which can be challenging. The hilly course runs from cemetery to cemetery and costumes are encouraged. The course takes you through downtown Vernonia, so be sure to make a spectacle of yourself as you help raise money for local arts scholarships. There are cash prizes for best costumes, including best group costume.

The 5k Ugly Sweater run in December is a fundraiser for the local Chamber of Commerce, who host many different free community events during the year. The route takes you around Vernonia Lake and along the Nehalem River. This run, like the others, is open to walkers as well, who register in a separate category.

The Oregon Road Runners Club hosts the Vernonia Marathon and Half Marathon in April, which start near Vernonia and end in Banks or half way at Stub Stewart State Park. Several other running events happen more or less annually, and spontaneous events happen every weekend.

No matter what your fitness interest, there is something in Vernonia for you. With BMX destination Vernonia Springs recently opening just south of town, we’re sure to see regular races all summer long. Stub Stewart State Park has a wonderful mountain bike skills park that was created and maintained through a partnership between the park and local mountain biking associations.  A mix of freeride and cross-country trails provides for excitement for all skill levels. 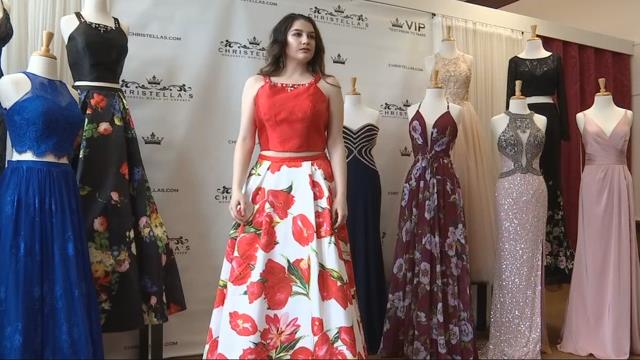 A Vernonia dress shop is attracting teenage girls and women from across the Northwest and even Canada.

Christellas is jam packed with beautiful prom dress and gowns.

Vernonians and visitors alike can appreciate the amenities of this little town, so it’s pretty neat to see the product of another’s appreciation.  Lance Reis has written a nice article about our gateway trestle, the focal point of the dramatic climax of the movie “Ring of Fire”. He’s also made us aware that a great little piece of drone film is available that shows off the Mitchell’s “chip shed” building.

Read his article here or just go straight to the drone footage.

Vernonia Springs gets it’s permit for operation as a private park!

Congratulations VHS Track Team! Below is a report from Coach Byron Brown.

Vernonia Boys’ Team finishes 4th in State! The 4×100 relay team set a new state record at 43.57—the only team in State 2A competition to run under 44 seconds. Jared Medearis handed off to Steve Burns, who quickly separated from the other runners to give the Loggers a significant lead; Clay Sullivan lengthened it out some more, and Rob Connor finished it off, winning by about 40 meters and setting a new state record, eclipsing the 2011 record set by Central Linn. Clay Sullivan won the high hurdles in a big upset, leading from start to finish. Clay also finished 4th in the 300 Hurdles and 8th in the Long Jump. Rob Connor finished 2nd in the 100 and 5th in the 200 meter dash, competing with a strained hamstring. Francesco Mian placed 8th in the High Jump. The Loggers needed every point as they beat Nestucca by half a point for the 4th place trophy. 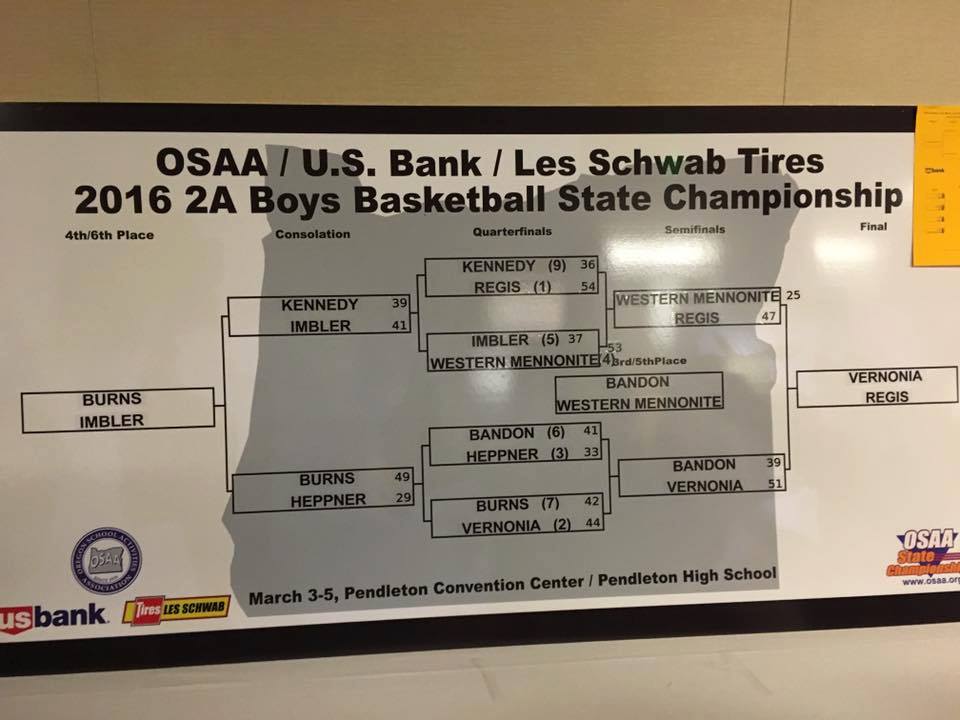 The Vernonia Loggers boys basketball team have advanced to the finals of the OSAA 2A State Championship in Pendleton, after defeating Bandon 51-39 on Friday night, March 4.

Head coach Devid Weller used his deep bench with 9 players seeing significant minutes for the Loggers during the game.

The Loggers advanced to the semifinals with a 44-42 win over Burns in the tournament opener on Thursday night.  Sullivan led the Loggers with 15 points and 8 rebounds and was named Player of the Game.  Brett Elliot scored 8 for the Loggers including 3 clutch fouls shots to give the Loggers a 43-42 lead with :41 left in the game. Arne Schiemann added 8 points, Francesco Mian  had 7, and Conner scored 6 for the Loggers. 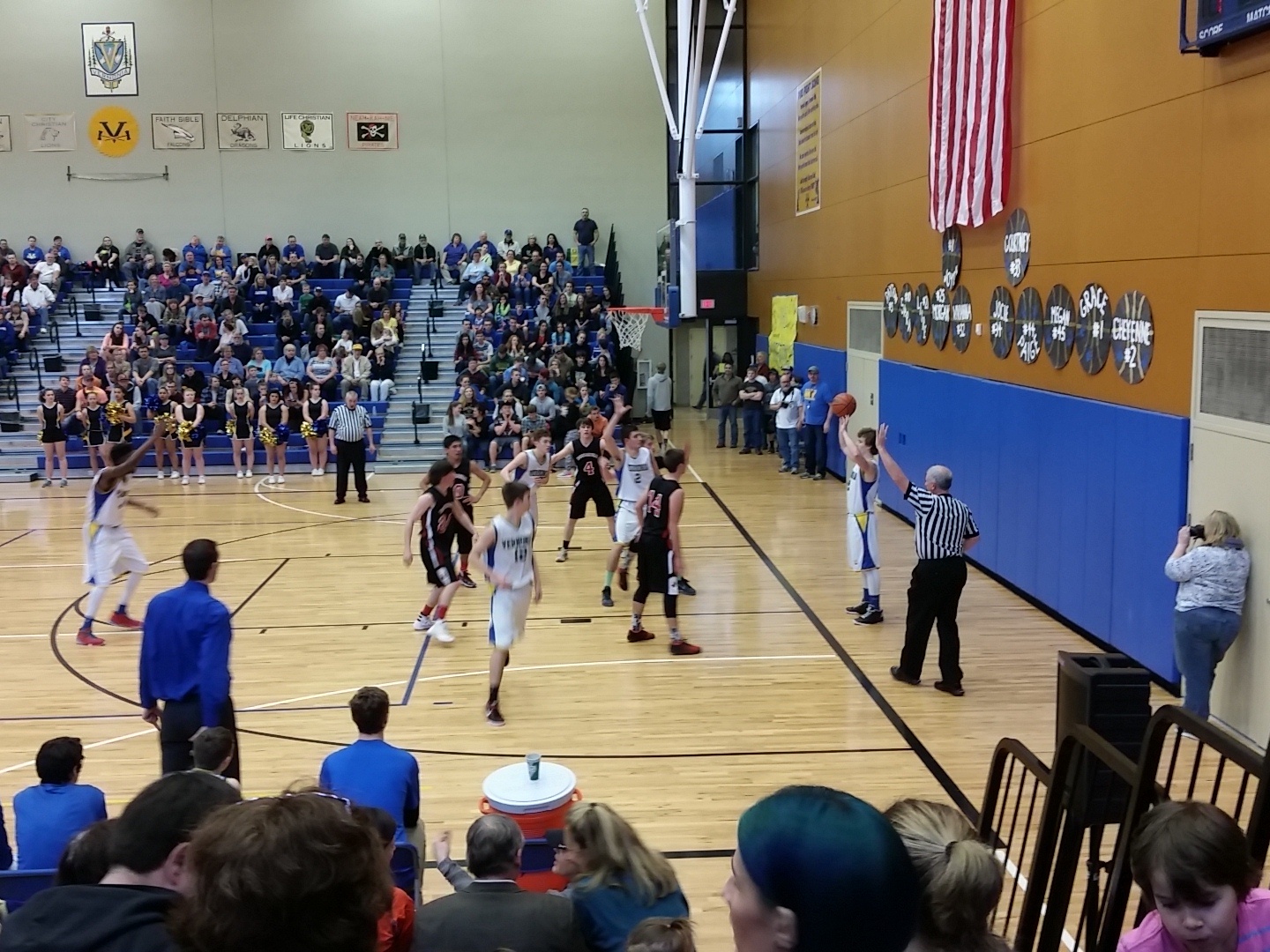 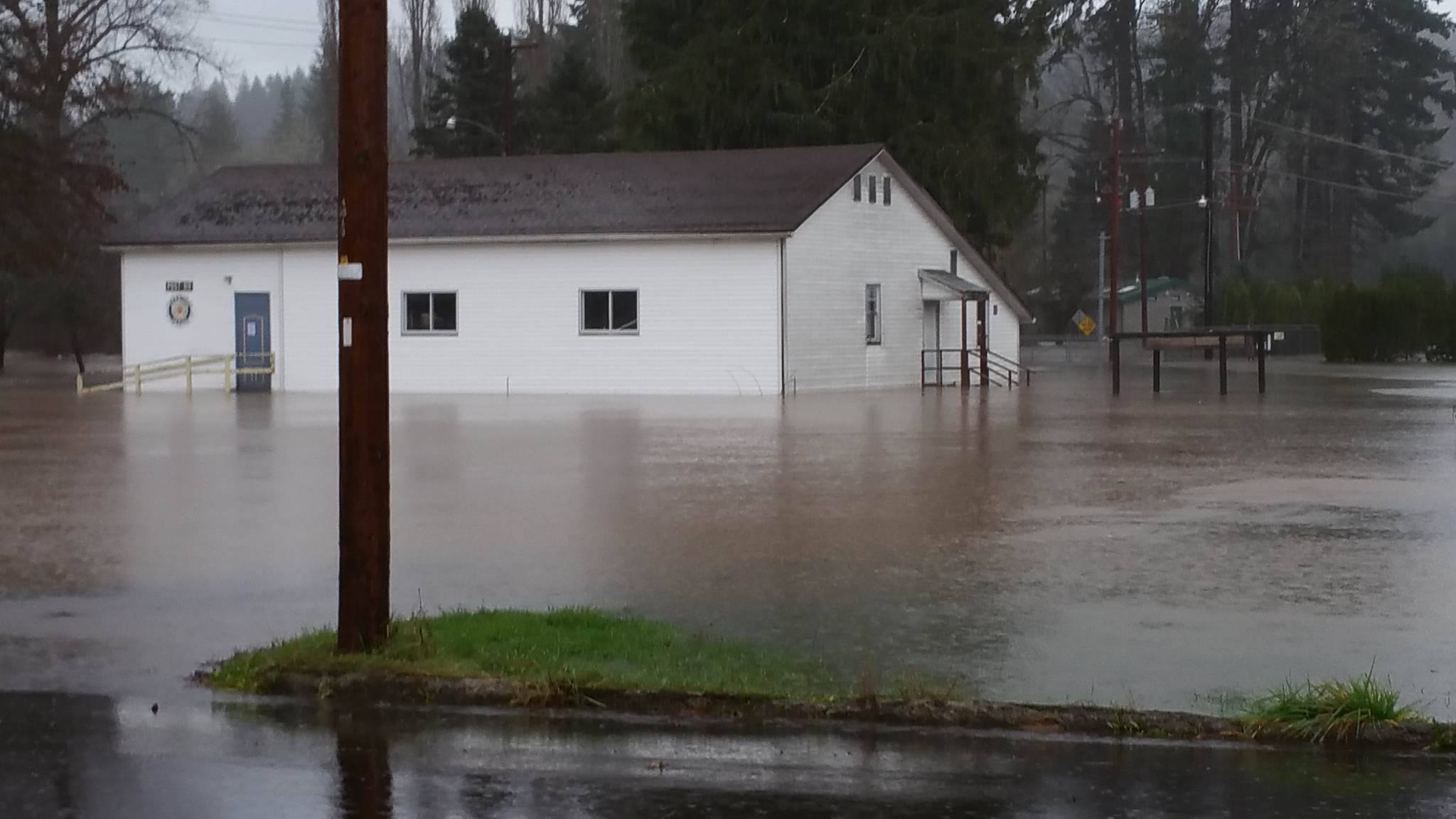 On December 8th, 2015 it rained again. And again. Over the past 2 days the town of Vernonia has seen 6″ of rainfall onto an already waterlogged town. This is certainly bad news, but the experience gained during previous floods means this is no tragedy.

All one has to do is look on the various community bulletin boards on Facebook to see what type of person lives in Vernonia. Compassionate, giving, caring. People helping people.

The Red Cross is setting up an evacuation center at the Vernonia High School and the Food Bank has relocated their essential services to that site as well. Homeowners in outlying areas are clearing culverts and posting when streams are over-topping roads. Hundreds of people in town are offering help, shelter, rides, storage, whatever is needed to calm the nerves of people already stressed by the weather and now frightened by the dark.

Offers of help are already pouring in from people living outside the area. They know why Vernonia is a great place to live, and that their assistance is well placed. If you want to help, please contact the Vernonia Rural Fire Protection Department at 503-429-8252, they would welcome the assistance.

To our friends in the south,

Today, I’ll promote kindness, I’ll put it first
It’s my way to counteract the pain and the hurt
I’ll focus on love, on faith, and on hope
The three gifts God gave us to help us to cope

I’m going to pray for the families and friends
For those whose lives were brought to an end
Those that are hurt, may their wounds heal
For everyone involved, it must seem surreal

The police and paramedics, the things they have seen
On their strength and courage we can all lean
Their dedication and service are over the top
We pray that this nightmare comes to a stop

Today, I’ll gather up joy and pass it around
Give someone a smile when I see a frown
Pray for those struggling with too much on their plate
Locked in a world of depression and hate

I won’t find the answer, I don’t know what it is
But love is the gift that we can all give
So, I’m going to share it and when I hit my knees
I’m going to pray, I’ll begin it with “Please”…

“Please heal our country, come into our homes
You’re always right there, we are never alone
Gather up our families in your loving arms
In Your name we pray, Please keep them from harm”

For those caught up in grief, our hearts are with you
When it comes to tears, we’ve shed more than a few
May you feel the love we’re sending your way
May peace and comfort find you today.

Written with love and a grieving heart,
By Kala Cota, a friend up north.
(feel free to share)