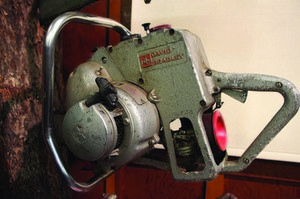 Built in 1922, the Vernonia Pioneer Museum was originally the headquarters of the Oregon-American Lumber Company. The men and women in the building oversaw the harvest of 2 billion board feet of old growth timber over 31 years, and shipped finished lumber of various grades and cuts all across the country. The innovative mill not only kiln dried the lumber to save shipping costs, they also custom milled lumber to fill large orders from home builders in the mid-West.

Following the acquisition of the company and lands by Long-Bell Lumber Company in 1953 which then merged with International Paper in 1956, the lands and property were slowly broken up and sold off, with the company headquarters donated to the city in July of 1961.

Preceding that donation, a group of Vernonians gathered to discuss possible uses of the building that would fulfill the stipulation of it being used “for the common good” and were most excited to hear that there was interest in using it as a historical society or museum.

In the spring of 1962, 25 Vernonia area residents met to discuss the formation of a Nehalem Valley Historical Society and establishing a museum in the former O-A headquarters building. Included in this preliminary discussion were items such as cost of glass cases, utilities to heat and light the building, and the cost of a museum curator. They also discussed the possibility of combining the library with the museum.

Several months later, presumably after the proposed historical society failed to materialize, the Columbia County Historical Society gladly accepted the city’s offer of the headquarter building for use as the county museum. Thirteen months later, after extensive remodeling and a fresh coat of paint, the museum had its grand opening during the 1963 Vernonia Jamboree.

The museum curator was able to live onsite because the city adapted the sales offices in the back of the building to accommodate living quarters. Over the next year various skilled members of the county historical society built the glass display cases and typed the artifact tabs which identified not only the item and its origin, but also the donor.

The curator was able to keep the museum open 6 days a week for two years, but cut back to four days a week at some point in 1964. The museum played host to many field trips of school children from the Willamette Valley who got a good glimpse of the hardships of pioneer life and the tools of taming the wilderness.

The decision was made sometime in the 1990s to no longer employ a curator, and that the museum would have to operate entirely with volunteers, who continue to do all the work involved with running the museum to this day.

During those first 30 years of activity, the collection of the museum swelled from a few hundred items to over 5000, all housed in 3500 square feet of space. For most visitors the highlight is the catalog of pictures showing various aspects of mill life. Many also marvel at the period dresses and menswear including a wedding dress and two wedding coats. This eclectic collection will find you admiring a square piano, a stuffed moose head, World War 1 and 2 militaria, and a rock collection, all in short order.

Several walls are covered with depictions of cutting crews, steam donkeys and the locomotives that transported raw logs to the mill and finished lumber out of the Nehalem Valley. The General Manager’s office now plays host to a diorama that shows the various activities that take place at a logging operation, including a spar tree, haystack boom, and a temporary plank road used by log trucks.

While there isn’t a specific display which makes the collection noteworthy, it is an important and impressive collection of ordinary life objects from the time of 1880 through 1960 that make this county museum a worthwhile stop for both residents and visitors to Vernonia.

The building itself, built in the Craftsman style, was recognized for its significance by the National Park Service in 2002 by being placed on the National Register of Historic Places. It was one of only three lumber mill offices that remained standing in Oregon.

The museum is open weekends from 1-4pm all year, and Fridays in June through mid September. Visitors can also arrange for private tours by calling 503-429-3713 at least 3 weeks in advance of your visit.